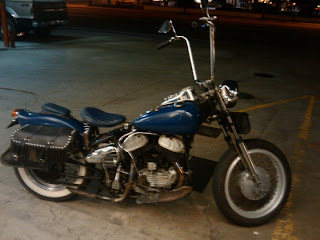 Joe13 has an impressive collection of motorcycles. A couple of the more late model Harleys he rides regularly. His '46 Flathead has been registered continually for a few decades, but it hasn't been on the road for about a year. As with anything, especially a 64 year old motorcycle, it needed a little coaxing.

When Joe13 rolled the bike out of its resting place, it needed a little work. Since he can do anything in his shop, this wasn't a problem and didn't take long. However, the kicker gears are just about shot, and because it had been sitting for so long, Joe13 pulled out his homemade... I don't even know what to call it. I would not have believed this "tool" existed nor safely worked had I not seen it in action. And in reality, I didn't see it work, because using the tool was a two-man process, and I was the second man (person). That probably makes even less sense. Let me explain.

While expecting Joe13 to be rolling out the bike, he took off to the back yard and pulled a small pickup truck around to the front of the shop. Thinking he was suffering from a severe case of shiny object syndrome, I kept my mouth shut and waited to find out what project we were working on now. It was then that he pointed out this strange steel contraption on the floor of the garage. It was about six feet long and two feet wide. Mounted on it were two large rollers running the length of the... thing. I'm still at a loss for what to call this.

Maybe you've seen something like this before. I never have. Joe13 made it himself many years ago. While it does require two people and a truck, if you live in the country on dirt roads without any downhill slopes from the shop, or if you and your friends are just plain old, it's a valuable tool.

Having started the motorcycle, Joe13 took it for a quick spin to clear out the cobwebs. It ran amazingly well. When he got back, I asked if he'd take me for a ride. It had been twenty years since I'd ridden on the back of a rigid frame with such sparse accommodations, and I wanted to reminisce. With the rear footpegs being only about six inches below and six inches in front of my seat, it required a bit of effort to get situated. I reached between my legs to wrap my arms tightly around Joe13 while he took off. It was awesome!

We rode into town, Joe13 using the suicide clutch and tank shifter as though he'd done it all his life. He's ridden that bike on the street since he was 15, so he has done it most of his life. It was dark at this point, with the moon poking out of some stray clouds, and as we passed the old drive-in, I felt like I was living a David Mann poster. Riding like that came back to me quickly. Wanting to shift my weight without throwing off Joe13's balance, I waited until he pushed down on the clutch and the bike slowed slightly to move my butt forward a little on the p-pad. I loved it when he leaned back and threw his left arm over my knee. I smiled when I considered that if I'd seen another woman riding on the back of a bike like that, I'd have been extremely jealous.

We got gas. Joe13 went in to pay and told me to pump. I took the cap off the right side of the tank but noticed the word "oil" stamped in the tank under that cap. There was oil in there. I replaced that cap and filled the left side with fuel. We took off back for the shop, losing power along the way. The spark plug wires had seen better days, and it was time for a replacement. Despite that small maintenance requirement, the bike ran great. The 99 degree August day had cooled to a pleasant 75 degrees and was finished off with an unexpected ride on a true antique motorcycle. Life doesn't get much better than that.
Posted by Abby at 8:15 PM