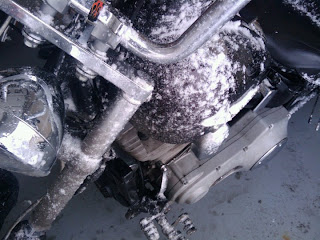 I recently moved into a new place. I had my motorcycle at Joe13's shop until I could get it to the new house. The problem is that the snow doesn't melt well in the driveway and the part of the road leading from the garage to the main road. Thanks to the warm Chinook winds of the last couple of days, the driveway was finally clear. I hadn't planned on moving the bike over today, but when I went upstairs from my basement apartment, the woman who owns the home I'm living in was dressed in leathers and was going to take a ride on her Deluxe. The thought immediately flashed through my mind that I could bring my bike home today.

I called Joe13 to ask if he'd be able to follow me back home and bring me back to his place to get my car. All good. As I left the house, I noticed some scary looking clouds to the north. Thankfully I was heading south. I stopped at my friend's coffee shop on the way. I wasn't there five minutes and noticed that the sky had become very dark. I figured I should get moving, and when I walked out the door, the snow had started. I called Joe13 and asked him to be ready because of the snow. He insisted it was a beautiful day where he was, not more than 10 miles south - if even that. Although it was starting to snow, I was confident there'd be light flurries with no accumulation. Maybe a little cold, but nothing serious. 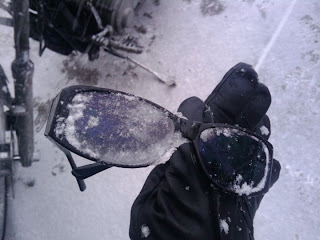 When I got to Joe13's, the flurries had followed me. I raced to put my gear on, pulled the bike out, and got on the road. Joe13 had decided to take the car, and I noticed he wasn't right behind me. I knew that he had a general idea where I'm living now, but he hadn't been there yet. The temperature was dropping fast, and the snow was now blowing across the road. I don't think I'd gone two miles before one of the lenses on my sunglasses was frozen over. My plan was now to get home as quickly as possible, and I'd call Joe13 and tell him how to get there. 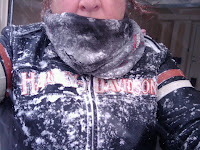 I turned north and realized I was now riding in a blizzard with visibility of maybe a quarter mile. When I turned east, I could see further ahead, but then I was riding with a hard cross wind. Snow was starting to accumulate in the center of the lane. I'd given up trying to clear the right lens of my glasses and was happy with the one good eye. When I started north again, I was losing visibility in the remaining lens. I couldn't tell if it was general visibility or my glasses. This was when I started praying. Seriously praying. I was staying in the track of the car in front of me and hoping that the road wouldn't freeze before I got home. I was praying that the left turn lane I would be using up ahead wouldn't be frozen up. I wasn't far from home at this point, but I could barely see, the snow was piling up, and I was concerned that I'd missed my window of opportunity with a clear driveway. 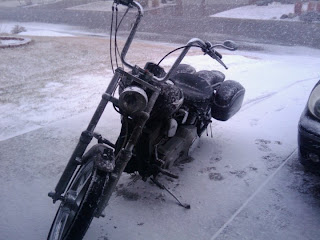 I was stressed with the left turn. I was counting on any oncoming cars to have their lights on, because if they didn't, I wouldn't have seen them. More prayers. Made the turn, made it around the rotary, and then came up on the house with a nice slick coating of snow on the driveway. I walked the bike up the driveway under power, with the rear wheel sliding from side to side. I stopped at the garage door and went inside to get some help. Before I moved another inch, I wanted someone there in case I started to drop the bike. Fortunately it didn't happen, and my bike was home.

I'm really thankful I made it safely. I think I'll check the weather report before heading out on a dark January day. Seemed like a good idea at the time.
Posted by Abby at 6:29 PM

Glad you're safe! We had this happen in Albemarle Sound - long crossing, shallow water, beautiful day; but weather report (what do they know?) warned of storms. We figured we could beat it. Didn't. One of the three times we donned our life jackets. Maybe those forecasters know of what they speak!

Very glad you got home safely. I have had the windshield on my Road King freeze over once and it scared the stuffing out of me. I can't begin to imagine trying to manuever with the elns of glasses freezing over.

Now You are a hard tail!