A story about a man and a tattoo

On December 23rd, we lost a good man. I know that many people have many stories about Webb. If you want to write one and post it here, let me know. This is mine.

A long time ago, when I was 19, I was a wicked drunk and made a lot of really stupid decisions. One of those was to get tattooed by some guy at someone's house. And it wasn't a little butterfly in an inconspicuous place. It was a big set of Harley wings in the middle of my back with my husband's name in a banner that descended below the main part of the tattoo. It looked like crap from day 1, and a do-over at Big Joe's in Mt. Vernon, NY didn't help much. Not that guy's fault. There's just so much you can do with a big blue-green blob. Several years later another modification was attempted, this time successfully covering up my now ex-husband's name with a dragon that rested between the wings with his tail extending through the banner below. The name was gone, but I still hated it. And hated it. And hated it. 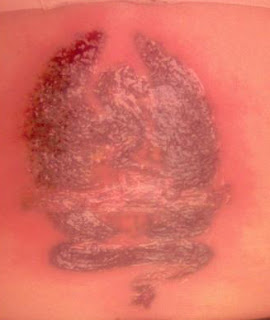 Finally, in 2008 (almost 30 years later), I started laser treatments to get enough of it gone that I could get a decent cover-up and be done with it. Damn! That's painful. Seriously painful. The guy I was dating at the time, who was sure he knew everything there is to know, kept explaining to people that it was like someone snapping a rubber band on the affected area. That would have been tolerable. There is no way to describe the pain. And beyond the pain, there's the blistering and oozing that goes on for weeks afterward. Perhaps it's not as bad for that tiny little butterfly in an inconspicuous place, but for a tattoo about 6 inches square in the middle of your back, it's torture followed by the extreme difficulty of trying to bandage a part of your body that you cannot see or reach with blood and puss staining every shirt you wear for a month. I don't think I'm capable of describing just how bad it was.

In 2009, I was a vendor at the Joker's Wild Realities Ride. I was set up near the stage for the tattoo contest. I'd heard that they were having a category for the worst tattoo, with a $100 gift certificate for a cover-up going to the winner. The contest was being run by Joker's Wild Tattoo Studio, and I spoke with the owner's wife about it briefly. With three laser treatments and about 8 months of ink dispersion after the last one, it was clear that I'd tried to kill it and still awful enough that I didn't feel like showing it to a bunch of complete strangers. Vicki, the owner's wife, kept coming by my booth and encouraging me to enter. I finally did. As expected, everyone was thoroughly disgusted, and I won. Yay! The only problem now was that $100 wasn't nearly enough to take care of the problem, and I didn't have the cash to make up the difference. I took my certificate and the plaque with the fake dog turd and went on my way.

The following spring I had enough money to get the cover-up. I gave Webb a call and went down there with a printout of what I wanted done. As I settled in for the next two hours, we got to talking about motorcycles and riding and God and riding and seeing as how he was an old biker and I was an old biker chick, we talked about riding and partying back in the day. And riding and spirituality and bikers and God. Webb said more than once, "A pretty girl shouldn't have an ugly tattoo."

I was leaving for a cross-country trip on my bike the next day to go see my newborn granddaughter in Vermont. Webb said it would be fine as long as I could keep my new tattoo dry on the trip. Of course I completely forgot about that when I went to jump in the hot tub in Illinois or Indiana or Iowa or wherever that was, but I jumped out as soon as I remembered. Vicki and I became friends on Facebook before the trip, so she followed my month-long journey online. I came back for another session on that tattoo and stopped by to chat from time to time. I visited Webb where he was tattooing in Sturgis that year, my first year in Sturgis, and crossed the street to chat with Vicki at a job she was doing there on Main Street during the rally. 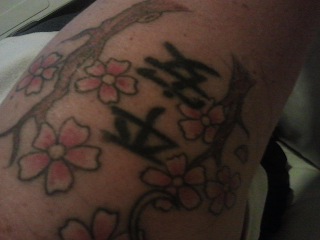 Webb ended up getting injured at a hotel in Deadwood that year, and tattooing became extremely difficult for him. I went to Webb and Vicki's 25th anniversary party in April, and just before I went to my writer's workshop in Aspen in June, I asked Webb to enhance a tattoo I've had on my upper arm for 20 years. He whipped out some gorgeous cherry blossoms with an amazing depth that weaves between the Phoenix on my shoulder and the Pyong Ahn symbol on my upper arm. It was one of the last tattoos Webb did. His injuries and subsequent treatments sapped the life out of him. He'd been tested for cancer and was fine, and in the blink of an eye he had cancer everywhere. From the time he was diagnosed to the time he passed was less than three months.

Because my work is very slow in the winter time, and I don't have family around here or any other holiday commitments, I've been able to help Vicki out quite a bit. It's been heartbreaking, but I'm glad I've been able to be there for her. I've been praying a lot for her, and I hope she'll be able to see the light, the good in life, before too long. If you'd say a prayer as well, I'd appreciate it.
Posted by Abby at 7:57 PM

Interesting story, man. Everybody with tattoos has at least one they will regret