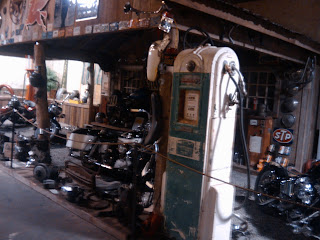 Great friends in Texas. Great food. Great shops and bars. The worst freaking heat like I never could have imagined for the middle of June. Yeah, I know. Bitch, bitch, bitch. I loved everything about my stay in Texas, except for the heat, and I've come to the conclusion that Texas has the worst cage drivers in the country. Just sayin...

About 4 miles from the border, my saddlebag bracket broke again. This time I was in the middle of nowhere, Louisiana. My brain was fried from the heat. I called my friend Chuck that I was going to see in south Texas, and he suggested I bungee cord the thing up. Great idea! I had one of these Rok straps, which are really great for tying things down on the bike. I only had one because I forgot to secure one last year on a trip and lost half of it. I'd thrown the one in the saddlebag for this trip thinking it might come in handy, and it was the perfect tool for the job. I was able to loop it through the brackets on either side of the bike, tighten up, and take off with the confidence that my stuff would stay with me.

I eventually made it to the "town" near where Chuck lives and tried to call him, but I had zero cell service from the store. I went in to ask about a pay phone. Remember those? You put money in them and then called people. Back in the day it cost a dime. Then it was a quarter. Then you needed a credit card. Alas, no pay phone. The woman asked what number I was calling, and I showed her my phone with Chuck's name. She told me that her father was a "close personal friend" of Chuck's, which totally cracked me up, but that was a good thing. She let me use her cell phone to call Chuck, and he emerged from the back woods to lead me to his house.

I pulled the bike in the shop and then ran to the air conditioned house. This was the first time I'd met Chuck in person, but I've spoken to him for tech tips on the bike, and I've corresponded with his wife about embroidery machines. What did we do before the Internet? Yeah, I know. I was there. All this information can be a curse, but it can be pretty cool too.

I had initially planned on spending several days at Chuck's; enough to get some good headway on the book, if not get it done. I had visions of sitting on the porch during the day, which were promptly shattered when the temperature was 109 upon arrival. Then I started worrying about stuff back home and not sleeping well. I had a great time hanging out with Chuck and his wife, meeting Chrome and Cardboard (I think that would make a great band name), and eating Crawfish Etouffee at the Cajun restaurant in the big city of Livingston. Chrome just returned from the Run for the Wall. It was a lot of fun hanging out with a woman who rides as much as I do. I loved her pictures from the trip, which included one from Wytheville (remember the initial broken saddlebag bracket). We had a good laugh over that. Unfortunately I missed meeting Cowboy, but the road called, and I headed up to Dallas to see a couple of friends before going home.

The ride up to Dallas, while nice at first, created my new dislike of Texas drivers over all others. I've now ridden in all lower 48 states except Kentucky, Washington and Oregon, and Texas stands out. Maybe being from New England and spending a lot of time in New York, I'm accustomed to outright hostile and aggressive driving. A number of Texas drivers struck me as clueless. There were two memorable ones. The first was a driver without brake lights, which in itself would be a little tough, but was made worse since the drive would choose to slow down quickly at times that weren't foreseeable. Add the logging truck behind me, and it was a thrill a minute. The second was an FJ Cruiser behind me in construction traffic. I'm not sure why he refused to pass me when I pulled over and politely motioned him to pass me after my subtle attempts to get him off my ass weren't working.

Dallas included a trip to The Old Bike Shop with its small but fun museum stashed in the back. After that was Strokers, the mega-mall of all things biker: bike shop, wild customs, all kinds of clothing and accessories, and a bar. I was thrilled to take this tour with a woman I've worked with at a distance, Raine Devries. We both contributed to the book Biker Chicks, and we are writers for Examiner.com. Raine is the Dallas Motorcycle Examiner, Harley-Davidson Examiner, and the Dallas Downtown Examiner. She is also heavily into film production. This worked out well for me because she knows people, and that meant I got to see a little behind the scenes fun at Strokers. After hanging out with Raine, I buzzed over to the east side of Dallas, on the edge of Lake Ray Hubbard, for lunch with a woman from HD Forums. After that it was back to my friend's house north of Dallas for dinner and a movie. We saw A-Team. So much fun!

Dallas was my last stop in Texas. I struggled with the need to get home and move, and my desire to take a nice cool ride in the Colorado mountains before getting back to life not on the road.
Posted by Abby at 3:44 PM

Thank you very much for sharing your thoughts and story. Many similar thought myself. Riding is what I live to do but dealing with clueless road users and having something on your mind at home can take the shine of the ride...Good luck in you future efforts! I will be here waiting and hoping you will contiue to share them with us.

another good riteup!! your view on texas drivers is pretty close....dont know why, there are a lot of rude and clueless drivers out there. i have a friend that rides and is working to change the bike awareness in texas. he is responsible for all the "share the road" road signs and metro busses with the same message on them.
have fun and stay safe!!
chuck

If you ever want to make a trip to Oregon and Washington, look me up. I just hosted Christina Shook for 4 days.."Chicks on Bikes". We had a blast!!