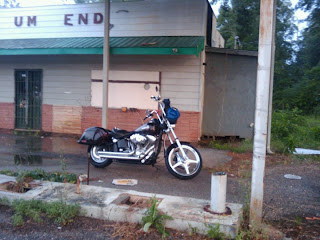 I left off at my first stop in Georgia. I made another quick one before heading back west across the southern states. At the risk of offending the friend I stopped to visit on the west side of Atlanta, I hadn't been expecting a lot. I knew it would be fun to see her and catch up, but I had no idea how much it would mean to me. I previously mentioned how I hadn't been back or spoken to anyone from that ten-year chunk of my past, for the last twenty years.

On one hand, I'm a very different person. There isn't a need to relive the past. People don't need to know who I was then. But I have to say, it is so comforting to talk to someone who does know who I was. We shared some... experiences, I guess is a good way to put it. Having someone to talk to that really knows what I was up against - priceless. We didn't visit for too long, but it felt like it took years off my life. (Having just re-read this, I think I need to clarify. I mean that in a good way, as in rather than having lived 48 years, I've only lived 45 - like that.)

I left Georgia on I-20, but I quickly left the Interstate and traveled through Talladega to Montgomery before stopping. It was hot. I stopped at a truck stop, where I think a trucker was trying to pick me up. I'm not sure if talking about taking a shower is the secret password, but it seemed like an odd topic for a random discussion with a stranger. I got on the bike and headed toward Mississippi.

I had planned to go a little further south and take US 84 west. As good as a nice summer shower sounded, the clouds to the south were looking a little scary. I didn't want to let the rain stop me again, so I planned on riding until the rain got heavy and then waiting out the worst of the storms. Although I was on a small state road, I saw that there would be a lot of opportunities at deserted gas stations, churches, and other uninhabited structures with awnings that would protect the motorcycle and me. I even considered spending the night in one of these places if the rain was more persistent than I was anticipating.

My first stop was at an operating gas station that was closing soon. The proprietor had satellite tv at his counter and was looking at the weather. I saw a huge storm just north of Mobile and just south of me; the northern edge of the storm I could see out the window. The weather report also showed rain throughout Alabama, Mississippi and Louisiana for the next day, which meant I had no desire to hang out any longer than necessary. I decided to keep pushing and at least make it to Mississippi. The storm hit hard but let up pretty quickly, and I was back on the way. 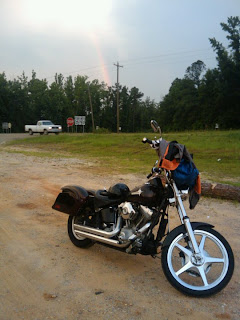 Before too long, I had to stop again. This time it was a dilapidated old gas station, but at least I had cell phone service there and was able to check my e-mail and hang out on Facebook for a bit before moving on. Soon after that, I stopped to check my map since my original plans included riding right into that huge storm cell. After parking the bike, I looked back and saw a rainbow. The skies were clear to the west, and I headed on toward Meridian, Mississippi.

When I got to Meridian, I stopped at an RV park. It was late and the office was closed. Well, the signage said the office was closed, but it was open. I looked at a map of the campground and saw nothing but RV spots. I thought about pitching my tent in any grassy area, but I wasn't feeling good about the place. I went into the pool area, sat on a lounge chair, and used their Internet to find a KOA nearby. I was hoping the KOA was more in the woods and cooler.

I don't know if it was cooler, but it just plain sucked. The first clue was when I made the turn into the unlit driveway only to discover it was deep gravel. Nice. Without going into a lot of detail, it was a bad KOA. The site was bad, the bathroom had overflowing garbage cans, the grass wasn't cut. Yuck. Fortunately I'd picked a remote spot, because it was so hot that I left the fly off, which left me lying in my cocoon, without any clothes on, and only the screen between me and the world. It was nice to watch the stars - with my Glock 26 at my side. Despite the heat and exposed feeling, I slept very well.

I had more plans for US 84 westbound, but my clutch cable had loosened dramatically over the last two days, and as I was heading west out of Laurel, Mississippi, I realized it wasn't going to make it to Houston. I called my friend Chuck to see if he could walk me through fixing it. Chuck didn't answer, and I was overheard while leaving a message for him. A local guy clued me into a shop called 49 Cycles and gave me the number. I soon realized that 49 Cycles was well off my intended path of travel, but my path of travel hadn't been set in stone this far, so no big deal. Besides, I had a feeling that this was going to be one of those times that something good came out of the complication. 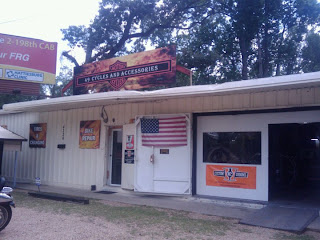 I rode on down to Hattiesburg to the shop. Michael took my bike right in and went to work while I chatted with his wife Laura in the air conditioned store. It quickly became apparent that Michael and Laura are Christians and like to share their faith with anyone who's open to it. I really enjoyed speaking with them, and Michael did an awesome job on my clutch. I'm so glad that God threw them in my path that day.

I made it to Alexandria, Louisiana that evening and got extremely frustrated trying to find the hotel I'd picked from Priceline on my phone in the Burger King. I had to call the hotel three times, and the last time I got lost I'd hit a really big bump that reminded me of the rigid frame days. All my irritation vanished in a moment when another guest that was checking in asked if he could take my picture with my bike. The reason? He has a friend who brags about how badass he is because he has a Harley - an 883 Sportster. How to make Abby forget all her troubles? Acknowledge that her motorcycle rocks. LOL. I met my friend Ranay, who lives in Alexandria, and we went out to dinner. The next morning I left for south Texas.
Posted by Abby at 8:11 PM

Good narrative. Remember, we are a composite of all of what we have done, who we were, who we knew. All of these composite themselves into who we are today. You may not have the fondest memories of the past, but all of them have shaped you into you today.

Amen David...we all have a past and thank God for His forgiveness and the ability to move forward towards the prize!! I love your adventurous spirit...the KOA experience made me laugh!! Hey I have an 883 Sportster and it rocks especially with me on on it!!