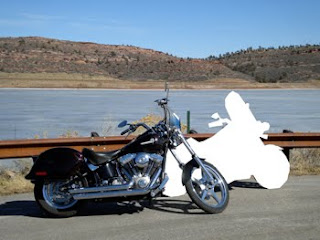 I met Joe2 on the Plenty Of Fish dating site. Before I get to the date, I'd like to comment on the site. I really like it, and it's totally free. Not deceptively free but just plain free. I haven't found a way to search with keywords like "motorcycle", but the broad search function returns lots of small pictures, and guys like to pose with their motorcycles. I've looked at many profiles of guys with Harleys, and very few of them I would automatically eliminate from the pool. I'm pleasantly surprised.

I had contacted a different guy before Joe2, and it looked like we were working towards a meet-up. In the meantime, Joe2 and I had started writing back and forth. Joe2's writing skills are... not his strong point. His pictures were OK and one included a very nice Road King. At one point, he messaged me and called me Melodie. I was ready to write the whole thing off at that point. I wasn't offended that he got mixed up because he was speaking with someone else, but it was one of those red flags that I'm so good at identifying and reacting to. Over-reacting to.

Joe2 clearly didn't like messaging through the dating site and asked that I call him. I'm not crazy about talking on the phone. I'm a writer. In the midst of me deflecting his requests to call, we somehow decided upon lunch on Friday. Friday morning came around, and I procrastinated calling Joe2 until after I'd completed a couple of hours of work.

As happens in these situations, we struggled to come up with a place to meet. Joe2 took control and suggested the Harley dealership at noon, and we could make a decision about lunch then. He asked if I was going to ride. That's when I realized what a warm, beautiful day it was and confirmed that I'd be on the bike. On the way into town, I decided that everything else I had planned for the day was on hold. It was going to be a great day for a ride - with or without Joe2.

I thought I was running late, thanks to a fingernail disaster, but I got to the dealership before Joe2 did. I was checking the time on my cell phone when I heard a Harley approaching. It was him, and unlike Joe1, he was much more attractive in person. Yay! Joe2 suggested Old Chicago, which was a block away, and off we went. The pizza bar was perfect seeing as how I was eager to hit the road. I fought a piece of cheese that wouldn't let go, and we both had a good laugh over it. Joe2 insisted on paying for my lunch. Not even an hour in, and things were great, far better than I expected. After lunch, Joe2 chose a route and we headed out.

I'm very patient with new riders when I'm teaching a class. I'm extremely critical when riding with a guy I'm thinking about dating. My potential riding partner does not impress me with his skills by riding really fast and taking chances. What that tells me is that he's more wrapped up in his ego than hanging out with me. You want to ride with me, ride with me. I have skills. I'm a confident and assertive rider. I will not take unnecessary risks because I think it will make you like me.

Joe2 was awesome. Not only was he a thoughtful riding buddy, but we seemed to mesh effortlessly in the traffic between Greeley and Loveland. I told Joe2 that I expected sand in the curves in the canyons, and I'd probably be taking it slow. Joe2 was very courteous and led at a reasonable pace. We stopped a couple of times for small talk and some photos. It was an incredible day and a memorable ride. We eventually parted ways with a couple of hugs and plans to see each other again.

I came up with the idea for this blog while we were riding. By the end of the ride, I thought it might not be a good idea. I do want to see Joe2 again, but how will he feel when I tell him I'm doing this? How would I feel if he was doing the same thing? Eh, that's tough. But if I go back and look at my motives for doing this, I'm trying not to get serious with anyone, anytime soon. Also, I'm a writer, and I believe this is going to be a fun and interesting project. So I'm doing it.

Glad you made it past the spelling stuff and enjoyed the ride.

Patty, I have to remember that not everyone is a writer, right? Good think!

Pinky, it's always fun to talk about big motors. *grin*

Ha! That should have been "good thing." Isn't that ironic?