No Joes but an incredible ride. 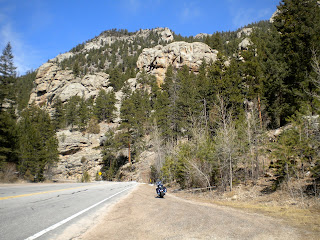 I knew today was going to be a good riding day. I was a little slow getting going since I was trying to work a first date into the ride. I missed a phone call from a potential Joe when I was in the shower, and then there was some messaging on the dating site with a few other guys, but nothing came together. Because I was hoping to get up to Rocky Mountain National Park with my laptop and do some writing, I wasn't disappointed that a date didn't materialize.

I decided to head east, almost to Windsor. Then I dropped down to 34 on 257 and over to Loveland.  Once I was west of the city, the riding got really nice. By the time I was passing the Dam Store and heading into Big Thompson Canyon, I was the only one on the road. Warm, sunny, incredible scenery, no sand, perfect curves... life doesn't get any better.

I took the Glen Haven route. I love the view of Estes Park and the mountains when you come over the crest after those crazy S-curves. In case you're thinking about riding up that way, the road gets sandy just before Glen Haven and it doesn't clear up much, including in the S-curves. 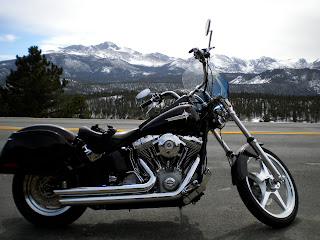 I stopped at one of my favorite quilt shops, which is next to the Shell station on the way out of Estes Park on 36, going towards Rocky Mountain National Park. I was ready to flash my National Parks annual pass at the gate to the park, but nobody was there. Bummer. I want to get my $80 worth, and I have until the end of July to do that. Trail Ridge was closed as I expected, but I was able to ride as far as I wanted. The road was getting very wet with the snow melting. I was getting wet, and it was cold and windy, so I decided to turn around.

On the way out of the park, I came across a herd of large animals with big racks. They weren't moose, and I don't think they were elk. They were awfully big for deer, but I suppose they make deer bigger out here than they do back East. Just after the herd of deer (or whatever they were), I ran into a herd of long horn sheep. Too bad the battery in my camera was dead. I guess two months on a charge is pushing it.

I took off towards Lyons via the Peak to Peak Highway. Again, it was perfect, and again, I got to visit another one of my favorite quilt shops.

I've found a new way home from the south that I really enjoy. County Road 13 is a good north-south route, and with a little zig-zagging at the end, I can end up at my favorite Greeley coffee shop, The Buzz, at 59th and 20th Street.  I finally got a little writing in and then headed home at sunset.

It was an amazing day.

Lesson learned: The last two times I've been riding, I've filled up the gas tank on my way home. I really like pulling out of the barn with all those blue lights telling me I can go a good hundred miles or more before I have to stop.
Posted by Abby at 9:42 PM