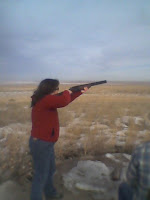 Another PlentyofFish guy. We started messaging, and I'm sure I looked at his profile, but for some reason the lack of motorcycle pictures didn't mean anything to me. He said he rode, not bad looking, he doesn't live far from me, and he's in to shooting sports. I love shooting sports!

I was excited about meeting Joe7, and then when I was thinking about his motorcycle, I couldn't remember what he said he had. I went back and looked at his profile - no mention. I looked at our messages - no mention. How could I possibly have gotten this far with a guy and have no idea what he rides? I messaged and asked. A white Sportster.

Eh, Sportsters can be hot. I felt like it was going to be awkward though. I was right. We met in Kersey, I on my customized Softail, and he on his stock, white, dirty 883 Sportster. It had been purchased for some woman who never rode it, and he bought it off the guy. If he'd ridden it a couple hundred miles in the last week, since he last washed it, I wouldn't care about the dirt. My bike is impossible to keep as clean as I'd like. However, over the next hour I determined that he'd probably ridden it a couple of hundred miles in the last year and a half, which may have been the only couple of hundred miles he's ever ridden.

He was nice enough, and attractive enough, but he led me over the back roads into Greeley, and every time we hit a curve, I rode up on his ass because he'd roll off the throttle. We went to my favorite Greeley coffee shop and chatted for a bit. Seems that he's pretty new at shooting sports; he's shot skeet a couple of times. When he mentioned target shooting with handguns, he said he didn't do it a lot, and I mumbled something about the price of ammunition. He has a .22. I felt a little deceived by the picture of him in hunting gear with the shotgun and the statement that he likes shooting sports. He likes shooting sports like I like bowling. Yeah, I've done it. I'll do it again. But I'd hardly consider it dating profile worthy.

I guess he was just as uncomfortable with my riding, because after coffee, he had me lead back towards our respective crop circles. I tried to stay slow enough so he'd stay with me, but I think 50 yards behind was his comfort zone.

Not a bad guy. Hopefully he'll take the Basic Rider Course as I suggested. I prefer someone with a little more, I don't know... experience.
Posted by Abby at 10:23 PM

Well, I'm not one to embellish a profile...I just put a picture of me as Carl from Slingblade...

Just caught up. Put this on my google reader. Can't wait for the... Looking forward to... just want to read about Joe8.