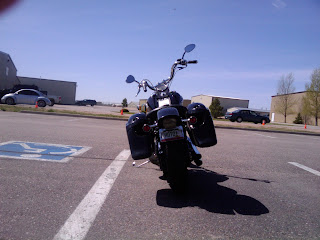 Joe10 and I have been talking about meeting for a date since Joe2. It's amazing that two people who don't work regular 9-5 jobs can have such a hard time meeting up. Perhaps it's the randomness of our schedules.

Anyway, a little background on Joe10. We first met last year at the Joker's Wild Realities Ride. I was a vendor, and Joe10 was there with his camera. This was within two weeks of the demise of my most recent engagement, and my ex was spending a little time at my booth; enough to make it clear that I actually knew him to anyone who didn't know our relationship. The woman who was running the event told me that Joe10 had asked the ex if I was single. I can't remember the exact response, but I do know that it was the first time I'd ever heard the term "cock block."

Fast forward several months to the new year when I was slaving away at the coffee shop. A couple came in, and I thought I recognized the guy. After chatting a bit, I realized it was Joe10. He came in a few more times with a couple of different women. Perhaps I'm wrong, but it looked like Joe10 was using the coffee shop as his neutral place to meet women found on dating sites. That's cool.

Another month or so after that, I stumbled upon Joe10 on Facebook, and I requested that we become friends. We did, and we proceeded to go into talks about meeting and going for a ride some time. For some reason, that took a lot of time. I must admit that I did stand him up at one point. We had a slight miscommunication about times, and I assumed he wasn't going to make that afternoon and made other plans. Oops! I was still going to try to wrap things up early and meet Joe10, but it didn't happen.

We finally got together yesterday. Joe10 had all kinds of random ideas on where to go, but there was nothing concrete. I'm flexible, but I also like decisiveness. I'm still somewhat new to Colorado, and there are lots of places to go that I don't know about. Joe10 had already expressed his distaste of riding to Estes Park, which was my suggestion a few weeks ago, so I was leaving it up to him. We finally agreed on a place and time to meet. He ran quite a bit late, but since I'd screwed up our last meeting, I waited. Stuff happens.

We were heading to Laramie, but it was a bit chillier up in Wyoming, and there was obvious snow not too far up in altitude between Cheyenne and Laramie. We decided to get some lunch and head back through Carpenter, Wyoming and Hereford, Colorado. The road comes out at Briggsdale, which is where 392 and 14 come together. Perfect!

Things didn't click for me. I didn't feel as though our riding styles worked all that well together. Not saying Joe10 isn't a good rider, but I didn't feel there was a natural flow. Our conversations jilted along in the same manner. Again, nothing bad about him, but there wasn't that ability to chat and laugh effortlessly like I can with a lot of other people. There was a comment I originally felt was sexist with regards to parking motorcycles, but in thinking about a lot of the conversations, criticisms weren't limited to women riders.

im with you. im a natural leader but i enjoy being feminine and soft too. the men i date must be stronger than me, lead me, have backbone and be straightup yet kind about it, and they must know when to let me make the call. otherwise they get their asses left at home or thrown outtta bed. :-D

P.S. - David is my favorite riding buddy and we are so in sync on the road.

it's a good thing you have 40 more to choose from....tough decision!! safe ridin!

The last time I met a woman at a Harley bar, I wore a Viking helmet, had our drinks served in skulls, and presented her with a vest of embroidered water buffalo hide. She looked at me with a smile, and said, "This is the best Mother's Day I ever had. You're a good son."

most guys don't mind making the call, they just don't like the negative feed back that seems to follow so often. If your man makes the call, be positive and he will be more open avout his desires in the future.( not just riding decisions)
When he says "whatever you want to do", he means it! The activity doesn't matter, just doing it with you! That's romantic!

It looks like the issue of "what are we going to do" means a lot of different things to everyone based on past experiences.

In this case, for me, I had suggested one thing and got ridiculed for liking to ride to Estes Park so much. Then when I asked where he wanted to go, he kept suggesting, I kept agreeing, and he kept making more suggestions, ad nauseum.

This brought up things that irritated the crap out of me in my two previous relationships. In my most recent one, decisions were extremely painful because of the lack of decision. I wasn't negative. I'm very spontaneous (probably to a fault), and he wasn't. We were such polar opposites in this way that I was always extremely frustrated, and he was left wondering what the big deal was.

In my relationship before that one, we went out to eat a lot. There weren't a lot of choices where we lived, but it always seemed like a chore to figure out where we were going. He'd tell me we could go wherever I wanted. I'd make a choice, and then he'd turn it down. Finally one night I brilliantly said, "You give me the list of acceptable choices, and I'll choose from that list." That worked, but saying we could go wherever I wanted to go was not exactly true.

Based on your response, it sounds like you've had some issues with this in the past as well.

So, lessons learned: It sounds like this is an area that can be really frustrating for dates and couples. Perhaps some communication between the parties on the issue is important, even though it seems fairly unimportant in the scheme of things.