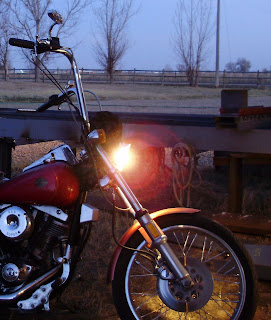 I know I'm going to regret it, but I have to say it: I don't like Shovelheads.

It's nothing personal. I'm sure there are some really nice Shovelheads out there. I have friends who ride Shovelheads.

The first time I was a full time biker chick was in the early eighties. I was married twice back then, both times to guys who rode rigid frame Panheads with suicide clutches and jockey shifts. In fact, I learned the fine art of riding one of those babies on a dirt logging road (our driveway) when I was about 5 or 6 months pregnant, just in case. It was the only transportation we had. I love Panheads.

Most of the people I knew back then rode Panheads. There were a few that owned the "late models", and we built some at the shop, but none ever stuck around. We had a particularly tough customer that had commissioned a Shovelhead. Well, he wasn't so tough; it was his girlfriend. He was paying for a running motorcycle. She wanted a show bike. I was pretty torqued by the fact that this witch was getting away with making all these demands, and when I saw her at a swap meet, I started a fight with her. I got my ass kicked. Big time. I suppose that getting beaten to a pulp over a Shovelhead hasn't improved my feelings for that engine.

Time passes. I go to bike shows and see Shovelheads in the antique categories. Huh? If it were up to me, I wouldn't even consider a vote for a Shovel as an antique. I don't care what the qualifications are. Good thing it's not up to me; I'm prejudiced.

Then along comes Joe8 with his Shovelhead that's been ridden hard and put up wet. I adore Joe8. He loves his motorcycle. It's kind of like a stepchild I'm not that crazy about. I understand, appreciate, and respect his unconditional love, but I'm not feeling it. And now Joe8 is pursuing an opportunity on the other side of the country, and that Shovelhead is going to be taking him there.

its murphys law, joe49 will have a panhead ;)

thanks for these posts.....
chuck

I love this 50 dates idea... But forgive me, II read your last three posts and placed myself in one of them:

Jack-1 (that's "minus one"), fat, middle-aged, BMW rider, with a roundel tattoo on his arm that looks like a Salavador Dali clock, as the skin has sagged. Unusual individual who relies on a Svengali-like "battered baby harp seal" look to get otherwise normal women to do his bidding. He paid the check, then smiled at the waitress, who then wrote her phone number on his bike's registration (under four others). This guy is so huge that when he straddles his bike, there is no indication he's on a motorcycle. (He appears to just run down the road at 80 mph.) When lunch was done, he reached over and touched my hand, offering a lifestyle of total disillusionment. His BMW has more lights facing forward than a 747 coming in for a landing, yet it makes less noise than rustling a newspaper. Seven of his ex's have tried ro kill him. He claims to understand how they could feel this way. He woke yesterday to find his most current ex-girlfriend sitting on his face, with a huge pillow under her butt, as she asked, "Having trouble breathing yet, you fat S.O.B.?"

Thanks Jack. Now I can cross another one off the list! Naaa. Maybe we can go for a ride together when I'm heading to Vermont/New Hampshire in a few weeks. Then I can copy and paste your comment into a new entry.


Joe8 brought me his '80 Wide Glide model to remember him by. Now I have a Shovelhead in my living room. I never should have said anything.

It is with pride that I must confess that I am not single. In fact, my current relationship, has held together for almost 12 years. Then again, I fully understand that it is a mere matter of time before the ether wears off and my shit will again be in the driveway.

However, I would be delighted to ride with you anyplace... And you will easily understand how the statement, "A woman without a man is like a zebra without a bicycle," came into being.

I love your blog. Would you mind if I linked to it from Twisted Roads?