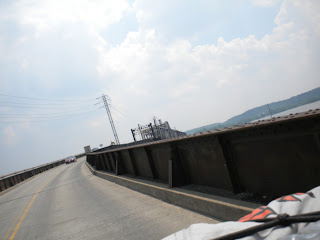 I was looking forward to a day with not much worth writing about, and I got it. Other than my surprise at how beautiful Iowa is, at least in the south, not much happened. I rode the back roads and didn't get a ton of miles behind me. It was a nice mellow day.

The picture here is of me crossing the Mississippi into Illinois. I thought I was taking a video. I've since figured out how to do that, so I can get it working on the fly.


I passed a lot of towns with flags. I value the fact that I can get on my bike and ride across the country whenever I want. Words will never be enough to express the gratitude for those who gave their lives for our freedom. The veterans who made it through alive have also done a great service to our country, and I thank them as well. Let's pray that we can strengthen the freedom that makes America such an incredible place to live rather than watch it all go down in a cesspool of over-legislation.

I had one badass moment passing through the south side of Peoria. I've been only in rural areas since leaving home, so the ghetto was a bit of a surprise. I passed a couple of guys on their new Harleys on my way out of town and noticed up ahead that there were a bunch of bikes lining a city block. From the look of the bikes, the building, and the guys out front, I determined it was a clubhouse and figured I'd just keep my eyes straight ahead and cruise on by. While things change, a lot stays the same, including the acceptance of women on bikes in some circles. I get it.

By the time I got closer, it appeared to be a bar with a lot of guys with shiny black customs all wearing shiny black tank tops and shiny black leather vests. Shiny isn't a word I associate with motorcycle clubs. They were far too polished. Anyway, one guy had his hand half way up in a wave, then must have noticed I was a chick. It's hard to explain the look on his face: quizzical... happily surprised... dumbfounded maybe? I went ahead and waved, since I was being waved to, and out of the corner of my eye, I saw a couple of the other guys wave back. I then cranked on the throttle and blasted over the bridge and out of town. My baby is loud and fast. I love her.

Women riding Harleys aren't unusual at all. I suppose that single women obviously geared up for a long road trip still are. Ladies, you need to get out there and do it. You're riding. That's great. Take the next step. Do an overnight to start out with, but keep pushing yourselves. There's a lot of talk about freedom. There is nothing more free than hitting the road by yourself.
Posted by Abby at 7:39 AM

reading you blog is like ridimg along with you.
HarleysLR

I hear you on people being surprised when you are on the rode alone. I get it everytime I go on a trip or frankly anywhere. I haven't been riding very long but I ride 90% alone. I have taken a number of multi state trips. When I stop and people fund out I am alone it is like the boggie man is going to kidnap me. I love to travel alone. That was true before the bike and even more so now.

Love reading your blog...I also enjoy writing/telling a story and your style and mine are similar. Difference is...you're more of a badass than me.

Thanks Mary, but please be assured that all the talk about badass is a joke. I'm a 48 year old grandmother. Really, how badass can I be? LOL