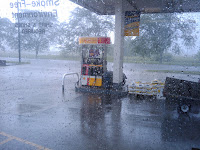 My granddaughter made it out of her mother's womb at 2:10 this morning. I don't feel grandmother old, but maybe that's why I ended up in a cushy hotel after about 150 miles.

As much as I love the back roads, the novelty is starting to wear off. They're great out west, but there's a line somewhere, maybe at the Mississippi, where the speed limit drops, the traffic increases, and the towns are closer together. And while it's nice to know that there'll be gas when I need it, it's getting tougher to make good time. Campgrounds are almost non-existent on the secondary roads. I wish I had the nerve to just stop and pitch a tent somewhere, but I'm not sure how secure I'd feel. Between the pathetic distance I'm getting and the lack of camping facilities, I'll probably be getting back on the Interstate system soon.

I had planned for around 300 miles today. That would have put me at a campground midway through Ohio, with about 150 miles to go on Tuesday to my friend's home on the eastern side of the state. When I woke up this morning, Weather Underground was showing a 90% chance of thunderstorms in the area. I was surprised; the weather looked great. I called a friend in Fort Wayne who told me that there were some bad thunderstorms in the area. That didn't surprise me, and I figured I might get wet at some point, but I didn't see the storms as a threat to my progress. Boy was I wrong.

The clouds went from fluffy white ones in the distance to solid walls of dark grey. Then I took a right turn and the skies in front of me lightened up. Even though the roads got wet, I didn't see the point in stopping for rain gear. I'd be through it soon. Then the route turned left. Ugh. Time to stop and suit up. I got a little wet over the next few miles. At one point it got so thick that I thought I might drown from the water soaking the bandanna (water boarding came to mind). I started gulping the water down, trying not to think about whether the water I was swallowing was coming from the sky or off the road. It finally started to let up. In fact, I was so optimistic that I stopped in a nursing home parking lot to check the radar on my phone to see if I should remove my rain gear.

The radar wasn't looking too bad, but it wasn't time to remove the gear either. I took a few minutes to chat with the old guys sitting on the porch of the nursing home then buttoned up and headed out. I was in front of a grey SUV when I started out from the light. The vehicle passed me, got in front of me, then slowed down. I pulled out and started to pass, but seeing a wall of water up the road, I decided to get back behind the SUV so I could follow his taillights through the rough patches. It started and it came hard. Cars were pulling off on the side of the road. I could see walls of water blowing across the road ahead of me. Even though my guide was only a short distance in front of me, I was losing sight of him until he put his flashers on. At one point I glanced into the wind to see if there was a tornado coming. I wasn't sure what I'd do if there was and was glad I didn't see anything. I dodged lightening bolts, made it into town, and decided to stop for gas and wait out the storm.

I started to get gas, but there was so much water blowing under the roof over the gas pumps that I didn't dare remove my gas cap. The water flowing along the ground was over my ankles as well as the rims on my bike. I went inside to wait and check the radar again. The radar looked worse than it did earlier. I really wanted to get further than I was, but I didn't want to die either. I waited for a break between storms and headed for the nearest hotel. I'm a little discouraged. I feel like I should have been able to tough it out. Then I think it would be stupid to take those risks and put up with the crappy conditions when I don't have to. Whatever. Here I am in Huntington, Indiana. Boardman, Ohio tomorrow.
Posted by Abby at 4:42 PM

Sounds like you got caught up in the same storm I did on the way home tonight. Left Mansfield heading west on US-30 and it was bright and sunny...30 miles later it was a monsoon for about 5 miles and then let up just as quickly as it had started. It was on and off like that all the way home.

Man, I was freakin out just reading about the rain. I dont mind rain.. its the storms that scare the heck out of me!
Will be anxious to know you got home. Sorry... Im a REAL whimp.

High and dry in Colorado, reading your description of the Indiana rain storm reminds me why I like living in Colorado.

there is not a bit of whimp in you Abby, you did the right thing. be gald you could take a hot shower and relax you have a long way to go yet.
HarleysLR

Proud of you! Good riding in tougher conditions. You don't want to wind up going down on your bike - so don't second-guess yourself. Wait out the bad storms. You're doing great!!

300 mile days can be pretty tiring, esp. with lots of traffic. Bad weather adds to the load. Be careful with fatigue at the end of your journeys each day. A lot of bikers have gone down with accidents after sunset. Don't push too hard. Sometimes it's just smarter to get a roof over your head by the end of the day.