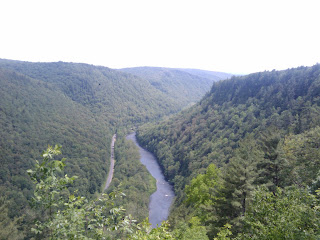 I woke up the morning after the rain day hoping for a fresh new start. Despite putting on cold, wet boots, it went well. There were low clouds that seemed more like fog that had separated and drifted up a little. Before too long, the day was sunny. I was headed to a friend's house on the eastern edge of Ohio, and she'd mentioned thunderstorm warnings on her Facebook page. I was determined to make it if it took me until midnight. Fortunately that wasn't required. The weather was beautiful. The ride was OK. Back roads again, which were nice, but I was getting tired of flat and straight.

I had been considering more Interstate yesterday, since my clutch hand was killing me and I felt like I needed to pick up the pace. Looking at the map, I could get out of town quickly and then head up for some scenic riding through the Allegheny National Forest along US 6. I saw the Pennsylvania Grand Canyon marked along the route and decided I'd look for it when I got to the area. After that I'd be heading up US 220 to New York route 17, east into Binghamton, and then northeast toward Albany. I wasn't sure how far I'd make it, but I was going to be happy if I could just get into New York. New Hampshire would be less than a day from there.

I was in a really pissy mood for some reason. I thought of the conversation I had with the tattooist when he was working on my back a few days before I took off. It's nice that we (bikers) don't get thrown in jail or pulled over for no good reason as much anymore, but sometimes you want people to leave you alone. Everyone wants to be our best friends now. As social as I usually am, yesterday was not the day. I must have had that look, because almost everyone gave me the feeling that they were calling 9-1-1 if I didn't leave soon.

I caught a glimpse of a sign that said "West Rim - 5 mi" as I was almost passed the turn off. I was making pretty good time, so I hung a right and headed up the road. It was a fun ride; narrow, curvy road with trees overhanging. It was shady and cool, and there was hardly anyone else on it. I messed with the video on my camera and took some shots (I'll upload them later). I was wondering if I was on the right road when I finally came out to the overlook. A few minutes later, another Harley came flying up and stopped. I thought there were two people, but it was just an extra helmet strapped to the top of the guy's T-bag. I guess he hoped he'd get lucky. He was from New Mexico. I found it amusing that there were two of us who lived close enough to the real Grand Canyon to make it a weekend trip, and yet here we were in Pennsylvania overlooking a... valley. It was pretty, but not spectacular. I'd been feeling homesick all day, wishing I was back in Colorado, and this didn't make it better.

I kept plugging along, made it through Binghamton being a total hater all the way, and got back into a rural area between Binghamton and Albany. I got off the Interstate and checked for a KOA nearby. There was one close enough it was worth calling. She told me I had about 40 miles to go and they had plenty of room. I ate a little bag of Swedish Fish, which gave me the sugar rush I needed to blast through the next half an hour. It was well worth it.

I have an awesome campsite by a river. I went all out and got firewood, marshmallows and hot dogs. I liked it so much, I considered calling the baby's mother and checking to see if it was OK to show up Friday instead of Thursday. As it turns out, the baby needed to go to a hospital in Boston to have a suspected cataract in her eye checked out, so I stayed another day. I've done a good bit of writing on the book and have enjoyed my day off of the road. Tomorrow I'll get to ride some of my old favorites in Vermont.
Posted by Abby at 11:28 AM

US-220 is a nice ride all the way down to Hughsville, PA. So did I miss a post or did you skip writing of your passage through Ohio?

I kind of skimmed over it in the first paragraph. It was a very nice ride, but there wasn't a lot to say about it. Southern Ohio is like southern Illinois or Indiana: if you aren't from there, you don't realize how much of the state is rural and beautiful. Us outsiders think of the cities along the lake(s).

Yeah, western Ohio...especially the northern half is pretty flat and boring. I should know, I live here. haha I saw you stayed in Huntington, IN for the night and thought you might have passed through my neck of the woods on US-30 or US-224.

Oh shoot! I did go across 224. I didn't know you were close to it. Bummer. Sorry if you said that and I totally missed it.