Now THAT'S what I'm talking about 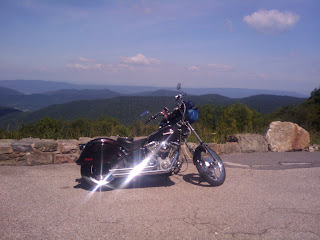 Started out early. I was excited to get on the road with nothing but sunshine and the ultimate road ahead of me. In fact, there's absolutely nothing to report, except that I made good time and took lots of pictures and the weather couldn't have been better. I really enjoyed the Skyline Drive, especially the part where they accepted my National Parks Annual Pass. I know most people wouldn't like to pay, but I'm trying to get my money's worth before the end of July. The Skyline Drive was $15 towards the $80 it cost me.

I was a little taken aback when I saw the the speed limit for the whole road is 35 mph. Maybe it was the fact that it was early on a weekday, but there was nobody out there enforcing the speed limit. Even better was that the road had such great curves I didn't have to exceed the speed limit very much to enjoy the ride.

The Skyline Drive ends and the Blue Ridge Parkway starts - or vice versa, depending on which direction you're heading. The parkway doesn't cost anything, but it's a bit bumpier. There are a lot of overlooks that may have been overlooks back in the day, but trees have grown up and you can't see much. It's still a beautiful road and well worth it. Skyline Drive goes through the upper part of Virginia, and the parkway covers the rest of Virginia and North Carolina.

After a while on the parkway, I needed gas and was hungry, so I got off at Buena Vista. While there, I decided to hop on I-81 to take me down to Wytheville where I was planning on camping out. I also wanted to visit the Harley dealership there. We're friends on Facebook, and we've had a little interaction, so I let H-D of Wytheville know I was coming.

It was really cool when I showed up and the marketing manager came out to see me. We chatted a while, and I went in to pick out some t-shirts. She wanted to take a picture of me with the bike, so we went back out. Wouldn't you know, it started raining. Now there's another person who can chime in on the issue. But the rain quickly became a non-issue when I noticed that my saddlebag was hanging down. At first I thought it had become detached, but I quickly noticed that the bracket had broken. Great. Fortunately I (kind of) knew people there - my new BFF. She talked to the guys in service, who looked at the bracket, and decided it could be welded. The next step was calling around to find someone who could weld it after 5:00 on Thursday night, and we discovered that Homer over on Lover's Lane (not kidding) could do it. She drove me over in her car, Homer welded and painted the bracket while we sat in the office and played with the dog, and we went back to the dealership and put the bracket back on. So there was this beautiful, well-dressed Southern gal right there with me, getting greasy. It was awesome. I know all the guys that were hanging around watching us work wished they could get in on the action. Oh well. Maybe another day. 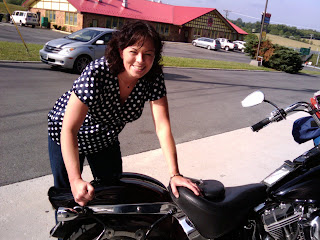 I'll keep an eye on the bracket. I called National Cycle, and they made me a deal on a new set, which will probably be waiting for me when I get home. Now I'm at the KOA and will be heading out tomorrow for another beautiful day of riding that will put me in Georgia by the end of the day.
Posted by Abby at 6:59 PM

Several years ago I had a contract job down in Buena Vista and got a sampling of the BRP in my cage, and ever since I've wanted to go back and ride it and Skyline Drive.

Enjoy the scenery, after the last few days of crappy weather you deserve it!

Love your stories Biker Chick...following from up here in Windsor, Canada but just curious why you don't post more photos of you on the bike along the way....I guess I am a visual learner!! But also jealous as I am a very new rider and not sure I could do such a trip...one day!! Keep it comin!

Believer, it's hard to have pictures of yourself when you're riding alone. Keep riding; you'll get there!