You can go home again... 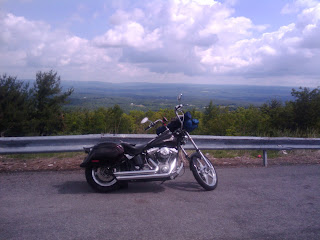 but it's kinda weird.

I left the campground in New York on... (what day was it?) OK, Friday morning. Had to check the calendar. I left the campground Friday morning, fairly early, and blasted up I-88 a couple of exits where I stopped to get gas and something to eat. It was one of those exits that advertises services, but then you have to drive five miles through traffic lights, rotaries, and school zones before you can find them. I finally ducked in at a McDonalds - fast and cheap. There was a Can-Am Spyder in the lot, and I parked next to it.

Going inside, I noticed that this McDonalds doubled as the town's senior center. I wouldn't have wagered a guess who belonged to the Spyder. As I was almost finished with my meal, a Harley-looking guy came in, looked at me, nodded and smiled. You know what? This was something new. He obviously knew my bike belonged to me. One would think this was common, but it's not. There's usually an entire conversation that takes place before someone believes that my bike is mine. I typically have to get into her age and measurements and prove that I have a clue about the pretty Softail. Despite the unusual "don't even ask me the time of day" attitude I'd been having for a lot of this trip, I asked him if he'd like to sit with me when he walked by. He did. 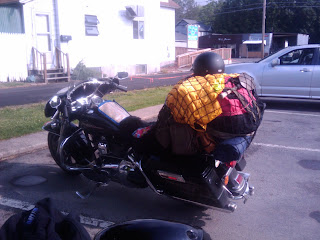 I'm glad I asked. We had a great conversation about long distance trips. He told me he had gone to a wake someplace west of where we were at the moment and had used the opportunity to do a test run for the Hoka Hey Motorcycle Challenge. I've read about this. It's a 7,000 mile race running from Key West to the Kenai Peninsula in Alaska. He's heading down to Key West soon to start the race on June 20th. His name is Heinz, and if you're on Facebook, search for Heinz's Hoka Hey Motorcycle Challenge and become a fan. I left there feeling more like my happy road-trip-girl self.

I had been planning to make a quick trip of the morning's ride, but Heinz suggested 23 along the Catskills. He was following 23A, but I needed to move along a bit quicker than 23A could take me. Because I can be easily swayed, I figured an extra hour or two wouldn't hurt anything and changed my plans. Yes, all of you out there that have expected me at some time or another and I've shown up a day late... there's your answer. Which is why I don't think the Hoka Hey would work that well for me. I'd see a shiny object or a squirrel or something, and off I'd go.

So I crossed over the north end of the Catskills, hit I-87, and continued up around Albany to Troy. That's where I got off the Interstate and headed east towards Bennington, Vermont. I stopped at one of my favorite Harley dealers. It's called Brunswick Harley-Davidson. I like it because the building looks like a huge log cabin. The bathroom is really neat too. You can lose track of time sitting there (that shiny object problem again). I have no idea how they are for buying bikes, parts or service. I just like the place because it looks good. 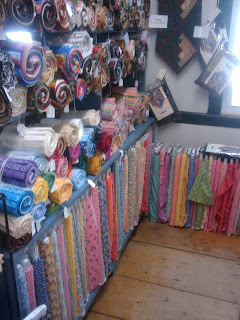 After that was the ride into Vermont. I was getting to familiar turf. I started knowing where to turn without having to look at road signs. I was also getting annoyed with the east coast issue of too many vehicles and towns too close together. I thought it must have been a banner year for frost heaves. It was like my bike had the hiccups. The trees were nice though, and I miss the way you can ride down into a shady area with a small creek running through and feel the temperature suddenly drop ten degrees. Just when it gets a little too cool, you come back up into the sunlight and warm again.

I wound my way around southern Vermont until I got to Chester, the home of my favorite quilt shop. I killed at least an hour there, as well as an undisclosed amount of cash, some of which went to shipping my new future creations home. No room for purchases on this trip.

After the quilt shop, I started winding my way north until I got to White River Junction and the home of my granddaughter. She's definitely the most beautiful, wonderful baby that was ever created. She loves me. I showered her with several Harley t-shirts, which are additions to the ones I'd already mailed out. Her mother likes her in pink, so I've given in on that and bought mostly pink Harley items. However she is the best-dressed baby I've ever seen, so I'm not sure when it will be t-shirt day. I'm sure I'll get pictures. 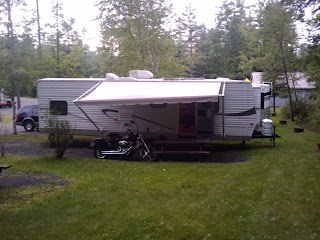 Because a lot of rain was forecast, I looked into hotel rooms. Very expensive here. I called the KOA to see if they had any of their "Kabins" available. They don't have Kabins here yet, but they did have an RV that was cheaper than any hotel room in town. It's a great alternative to a hotel room. Kitchen, tv, fire pit, picnic table, and the bike parked under the awning next to the front door. I've been loving it.

The baby is gone. I hope she'll be able to come out to Colorado to visit soon. Tomorrow I head over to New Hampshire and meet some friends to hit some of my favorite spots before heading south towards Georgia on Tuesday. It's been a nice couple of days here, but I'm ready to hit the road.

I saw my mother and a former co-worker. It was great to see both of them, but that's about my limit for trying to get together with old friends at any one location. When you start trying to hook up with too many people, the trip gets complicated. The weird part is being from someplace else, but being from this area before that. I'm from out of town, but I know where everything is. I'm from Colorado, but I have a local cell phone number. I know a couple of people at the local Harley dealership, but nobody else has a clue. Luckily tomorrow I get all the good parts about being back without all the weirdness.
Posted by Abby at 6:54 PM

Glad the trip has gone well so far and glad you got to see the little one. She is blessed to have such a caring grandmother.

That was one happy scene: you and your grandbaby Gracie Abigail, plus your greatly upgraded Harley - all together! Love seeing you! Have a fun time wending your way back to CO.

cool abby.......glad the trip is going well for you. i had no idea about the koa's, think i will have to check them out!!!! catch ya later, stay safe and have fun!!!
chuck