Riding New Hampshire - all I hoped it would be

I was excited about getting to visit some of my favorite places in New Hampshire, but I was also nervous that I'd get my hopes up and then be let down. But it was awesome!

I met Cheryl and Tom at the Harley dealership in Lebanon. I had seen Marc and Scott at the dealership on Friday, and this time I got to see Dawg from HD Forums, aka Road-Dawgs1 from Harley Tech Talk. I knew I'd seen him before, but he recognized me first. It took me a minute to put the face with name. Well actually, he kept dropping hints, and I was slow. I love running into people like that. 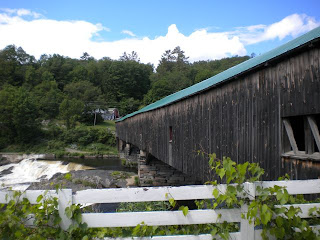 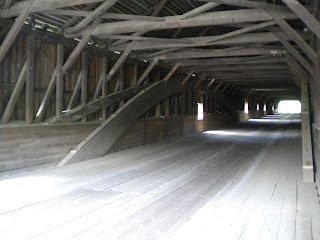 When I left the building, Cheryl and Tom were outside scoping out the long line of used bikes for sale in the parking lot. Cheryl has her eye on this sweet blue Road King. She should get it.

After catching up a little, we jumped on the bikes and headed north through Hanover to Bath, home of the Brick Store, which bills itself as  "America's oldest continuously operated general store." I don't care how old it is, they make incredible smoked pepperoni, which they smoke right there. For the first time ever, I checked out the covered bridge behind the store. It's the longest covered bridge in New Hampshire (it crosses the river to Vermont) and one of the oldest in America. Look at the Burr-Arch construction in the picture.

From there, we headed across Route 112 to visit Beaver Pond and then ride the Kancamagus, which is probably the most popular motorcycle ride in the state. As we were leaving Woodstock, we noticed some evil looking clouds. Sure enough, just after we got over the pass, the rain hit. This is standard when I ride with Cheryl and Tom. Better than our last ride over the Kanc though; no snow.

After the Kancamagus, we headed south to the intersection of highways 16 and 25, to the Yankee Smokehouse. They get enough motorcycle traffic that there is motorcycle parking against one side of the building. Great food, extremely casual atmosphere. If you're ever in the area, you should stop there.

Of course it was necessary to stop at the Mecca of quilt shops, Keepsake Quilting, in Center Harbor. From there it was Laconia Harley-Davidson, formerly known as Meredith Harley-Davidson. We managed to take a left out of the dealership, which is nothing short of miraculous at times, and continued to head south towards the Weirs, which is the main drag for Laconia Race and Rally Week.

We were stopped at a light just above the dealership. When it turned, Tom and I both took off. We were shifting at different times, so when I'd let off the throttle to shift, he'd come up alongside me - just enough that I could see his front wheel out of the corner of my eye. When I squeezed the clutch to bang it into 5th, I expected to see Tom's front end but didn't. I looked into my rear view mirror and saw a minivan instead, with Tom behind it. I was stunned. I didn't see how it got there, but I couldn't imagine any way the minivan got in between Tom and I without doing something that he should be shot for. Figuring that the idiot must be in a big hurry to pull a move like that, I casually slowed to about 25 mph. It didn't take long before the eunuch figured out that if he wanted to go anywhere, he needed to pull over and let the other motorcycle pass. When we got to the Weirs, I asked Tom and Cheryl what happened, and apparently the guy almost took us both out in his need to get ahead. 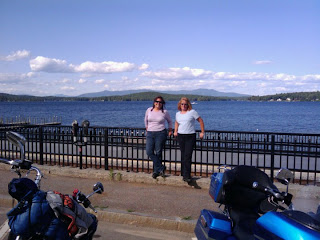 Having survived that, we enjoyed some conversation and pictures at the lake while watching vendors start to set up for rally week. With all the places I wanted to see checked off the list,  we headed back to their house for the night.

Cool you met Dawg. I actually love when I met HDForums folks. Almost more than when I meet BON folks out on a ride. I still haven't met any of the other women from the forum which I want to. Sounds like a great ride. I loved riding in NH a few weeks ago.