The second "going home again" portion of the trip 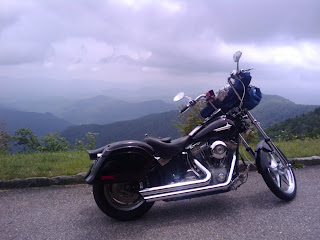 I slept really well at the KOA. For the first time on this trip, I slept with the fly open over my head, confident that it wasn't going to rain. It was a beautiful star-filled night, and I even saw a shooting star before drifting off to sleep.

There were a lot of miles to cover, and I decided to do some Interstate travel before getting back on the Blue Ridge Parkway. I headed south on 26, then west on 40, before stopping at Blue Ridge Harley-Davidson.

I browsed around the t-shirts, once again frustrated at overabundance of studs and rhinestones covering the selections. If it wasn't that, it was all kinds of weird cuts and strappy stuff that, well, if I was going to wear something elaborate like that to dress up, it wouldn't say Harley-Davidson on it. The two or three designs I liked, nice prints that reminded me of my newest tattoo, had been sold out except for a few in tiny or really big sizes. Clearly I'm not the only chick out there who feels that sparkly stuff belongs in jewelry and not on clothing. Having stretched my legs and filled my water bottle, I hit the road.

A little further up the road, I exited near Marion and headed up NC 80 to the parkway. That ten miles was easily as challenging as Tail of the Dragon, but there was no traffic, no cops, and it's right off the parkway. Unless you need to say, "Been there, done that," as far as the Dragon goes, find one of these twisties that takes you from the parkway into town and get lunch, then take it back up. Forgo the Deal's Gap congestion.

When I got up to the parkway, I pulled off at the first scenic overlook. There was a guy from Ohio on a Road King, and we discussed the virtues of traveling alone before I got back on my bike and headed south while he headed north. It was a beautiful ride with some threatening clouds. Riders passing me going the opposite direction were wearing their rain gear. I was resigned to getting wet. I didn't bother suiting up, because it was going to be scattered showers if anything, and I'd dry out before too long. I celebrated a landmark victory when I made it past the threatening clouds without catching a drop. I couldn't wait to write about my day of rain avoidance. As the Lolcats would say, "I can haz skillz."

I stopped at an overlook where the parkway heads down towards Asheville to figure out where I was planning on exiting the parkway and heading towards Gainesville, Georgia. A guy on a Victory pulled up and informed me that the parkway south of Asheville was closed. That meant change of plans, but because I was running behind (and I've ridden the entire Blue Ridge Parkway before) I was fine with exiting where they forced me to and jumping on I-40 to US 23.

It was as I was heading west on 40 that I was confronted by dark, ominous clouds again. I was feeling pretty smug, having conquered the curse earlier in the day. When I stopped at a rest area on 23, soaked to the bone, I overheard a couple discussing the hail storm that had appeared out of nowhere. Yeah, it didn't appear out of nowhere. It had lulled me into a false sense of weather optimism and then struck when my guard was down. I checked the radar on my phone and saw that I needed to keep moving if I didn't want to get in serious trouble.

The roads actually dried up for the most part, with just a few spots over the next 150 miles that were really wet. I was cooking though, dodging walls of water almost the whole way and hoping that law enforcement would be sympathetic should I get busted. Fortunately I didn't need to find out if relations between bikers and cops in that area of the country had improved since the last time I was there. Well, maybe it had. I didn't get thrown in jail for no good reason.

I have history in this neck of the woods. Not so much Gainesville, but I lived in north Georgia for 10 years. My boy was born in Atlanta. We left in a hurry exactly 20 years ago on June 23rd, escaping from a bad situation. I never contacted any of my friends because I didn't want to put them in the position of knowing where I was, should my husband ask. He passed away the same day my motorcycle arrived at the dealership, nine years ago. By that time, I'd moved on and didn't consider trying to reconnect with anyone. I did maintain a long distance friendship, talking on the phone an average of maybe a couple of times a year, with my friend Richard. Just recently I got back in touch with some of my southern friends on Facebook. That's why I decided to add Georgia to this trip.

I finally reached Richard's house and have been chilling here for the past couple of days. Richard had a stroke a few months back, which, coupled with the birth of my granddaughter, has me referring to this trip as the "Geriatric Tour." Tomorrow morning I pack up and one of my other Georgia friends on the way out of the state. Next stop, somewhere in Mississippi, God willing and the Creek don't rise.*

*Benjamin Hawkins, and the phrase would be correctly written as 'God willing and the Creek don't rise'. Hawkins, college-educated and a well-written man would never have made a grammatical error, so the capitalization of Creek is the only way the phrase could make sense. He wrote it in response to a request from the President to return to our Nation's Capital and the reference is not to a creek, but The Creek Indian Nation. If the Creek "rose", Hawkins would have to be present to quell the rebellion. I believe that the phrase is somewhere in his preserved writings. http://ngeorgia.com/ang/God_Willing_and_the_creek_don%27t_rise

The hearts of Alzheimers said...

Since you were from the south I guess you did expect the rain and the 100% humidity. I am in TN and I know it has been almost too hot to ride...hate saying that..

Yep. When I was leaving Colorado, people were complaining about the humidity. I was saying, "You're kidding, right?"

The strappy rhinestone stuff is the reason I usually buy guy's shirts.

The other part of today's story - the skipping the Dragon - was good. I tell people the most of them can find their own lizards to ride in their own neck of the woods - no need to travel to or be intimidated by "The Dragon."

You're not the only biker chick who despises HD sparkles all over everything ;) Right there with you on the "geriatric tour". I find that where I used to go 500 miles a day - now I aim for 200-300 and take it a bit slower. And you're so right about the "Dragon" alternatives. That part of the country has so many twisty roads that rival the dragon - they're just not so famous - but locals know.

LOL about the rhinestones.... I think they make them for me :-). But actually I almost never buy them from HD cause I often don't like the cut of the shirts...

Traveling alone as a chick on a bike is a trip. Even my quick jaunt on skyline drive and back caused the conversation with at least half a dozen biker crews. I can't wait till I can take a few weeks and do the whole country.

Skyline was the same way on beating the rain. I was lucky all the really bad stuff was down south more. Have fun on the next leg of your trip.

Rain and riding is always weird. By that I mean I know a lot of riders, including myself, that have made such a big deal about it, stressing about forecasts and whether to gear-up or not. And then - despite all the preps - we get caught in a few drenchers and notice that while we are wet and sometimes a bit too cold, we haven't melted into a puddle of green ooze. So as long as hail ain't in the forecast (or tornados - Dorothy got me spooked of them from way back) I'll ride. Of course, if that is all there is going to be, I will put on the rainsuit. Summer showers, though, are often far more welcome than intimidating. Good for you in riding it out!

Keep riding free, and safe - and thanks for sharing,
Red Rider